Professor Patrick Henaff (School of Engineers “Mines Nancy” at the University of Lorraine, France) is going to lecture on

on Monday November 15th, 2021, at 16:30. The lecture is organized by the Postgraduate Program on Technologies of Interactive Systems of the School of Informatics and is open to the academic community of Aristotle University.

The presentation will concern the use of bio-inspired robot controllers based on the functioning of specific biological sensori-motor loops that control biological systems. These loops are based on specific neural network structures, called central pattern generators (CPG) that are implied in the genesis and learning of adaptive rhythmic movements. Therefore, it is interesting to better understanding and modeling these structures to have humanoid robots able to learn rhythmic movements for locomotion or for interacting with humans.

Several videos of simulations and experiments will illustrate the presentation. A conclusion and perspectives will conclude the talk.

Dr. Patrick Henaff is a full-time professor within the School of Engineers “Mines Nancy” at the University of Lorraine, in France. He is the head of the research department, Complex Systems, Artificial Intelligence and Robotics, at LORIA, an applied Computer Science laboratory. His research interests lie in the bio-inspired control of humanoids robots. P. Henaff earned his Master’s in electronics at the University of Rennes, France, and completed his PhD in Robotics at the University Paris VI. He joined “Mines Nancy” and University of Lorraine in 2013. His passion lies in studying artificial intelligence, interactive robotics and neural control. He participated to several robotic projects especially for legged locomotion and control of rhythmic movements. He is a regular reviewer for international journals (IEEE TRO, Frontiers in neuro-robotics, IJARS, JAR, neuro-computing and conferences (ICRA, IROS, IJCNN, AIM). 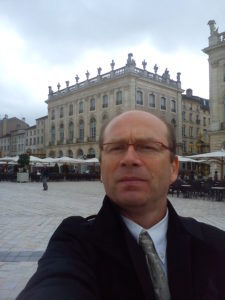